Elongated Skulls have been found all over the world, in particular around megalithic sites. A large percentage of these elongated skulls have the form they do because of cranial deformation as a result of head binding or cradle boarding , a practice that has existed also all over the world for thousands of years. There is, however, a small percentage, about 5% according to Brien Foerster, that are not the result of head binding. They are not the result of cranial deformation but are seemingly naturally elongated and quite large skulls. For a variety of reasons disease and / or genetic defect do not seem to be viable explanations for the characteristics of these skulls either. If these skulls are in fact naturally the way they are, it raises the question of who these big headed people were, terrestrial and an unknown (until this point) species and / or unknown version of human, or alien?

Despite being discovered in 1928 these skulls seem to have been ignored somewhat by the mainstream for much of the twentieth century. Lately, Brien Foerster has been looking specifically at the elongated skulls found in the Paracas region of Peru and because of work he has done a definitive answer in terms of what and who these elongated skulls are and were, seems much more possible and likely. There are some aspects to these skulls that point to their being not only naturally the way they are but also quite different from a human skull. The Paracas skulls that are thought not to be the product of cradle boarding have only one parietal plate while a human skull has two parietal plates. As well, these elongated skulls, in terms of volume are up to 25 – 30% larger than a human skull. The volume of a skull cannot be changed with cradle boarding, only the shape, which makes this point very interesting. And in addition, the elongated skulls that do not seem to be the product of cradle boarding have two little holes on the back of the skull.

My own opinion is that all of the characteristics of these skulls that point to their being natural are extremely interesting. The deciding factor of course, and the one that must blow the skeptics and the boring oh so boring debunkers out of the water, is the genetic factor. If DNA results can prove that these skulls are in fact another species, whether terrestrial or alien, then that is the road that must be pursued. It is also a road that must be pursued without any bias toward the terrestrial. It is the truth that matters, rather than maintaining a status quo / reality / paradigm that is not wholly consistent with objective reality.

For a better understanding of a what a human skull looks like including all its parts, have a look at this 360 visualization of a Human skull with all its parts. 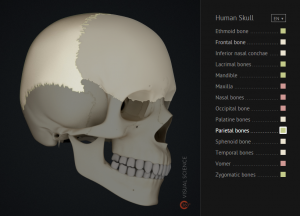 Now if you have two monitors, I suggest you throw this next link up on your second monitor and compare the skulls side by side. Human vs Elongated.

Here is another somewhat recent video about the genetics of the elongated skulls.