Examples abound of art from the medieval and renaissance periods which supposedly and sometimes apparently show some knowledge and / or awareness of ufos / E.T.s etc.  The traditional art historian will usually be of the opinion, however, that such interpretations are flawed and do not take into account the context of the art as well as the period in which it was produced. There are some examples where this may be or is probably the case. Having said that, there are still examples in the history of art where misinterpretation or lack of knowledge of context or tradition cannot explain away what looks to be representations of flying vehicles or unusual activity in the skies or of something we might call extra-terrestrial.

The 14th century fresco of the Crucifixion, in the Visoki Decani Monastery in Kosovo, shows two objects on either side of Christ that do actually look like manned flying vehicles of some kind. In context, representations of Christ being crucified, from this time and place in the history of art, often and quite usually have a depiction of the sun on one side and the moon on the other, often anthropomorphized versions of each.

In this context the anthropomorphized depictions of the sun and the moon on either side of Christ, that happen to look like manned flying vehicles, make sense. And maybe that’s all they are. Maybe the artist in no way intended these depictions to look like people in rocket ships. But then again maybe he/she did intend that and worked within the context and tradition available to him/her. I don’t think any scholar or expert on this art can say that there is no chance whatsoever that the artist did not intend to depict flying vehicles for whatever reason. 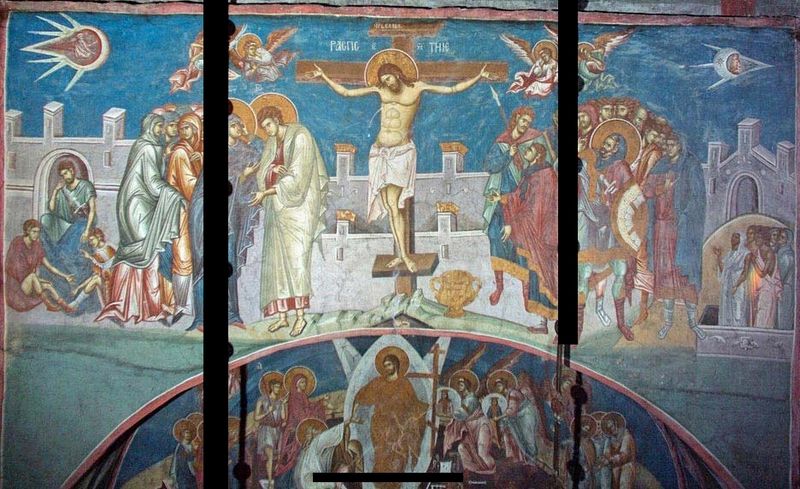 There are many examples where UFOs or other E.T. related phenomena have seemingly been spotted in medieval and renaissance works of art. In the Annunciation with Saint Emidius, by Carlo Crivelli, 1486, the circle of clouds in the sky is noted for its similarity to the common 20th century representation of a UFO we’re all pretty familiar with, with the ray of light beaming down to the head of Mary. The traditional art historian, for example in this article, is likely to scoff at this idea citing “iconographic language that modern viewers no longer understand” and the fact that many depictions of the Annunciation at this time also use a circle of clouds with a ray of light beaming down to show divine power.  Obviously in the context of the history of art this is a great point but what if it’s not quite that simple? This is a little out there but I’ll say it. What if during medieval and renaissance times it was not uncommon to not make the distinction between what one today might call “God” or “gods” and what one today might call aliens or E.T.s? The naysayers will say there is not evidence that people saw ufos during this time in history (which is not exactly true) but even so how do we know that people were not seeing ufos similar to the ones sometimes seen today. We don’t know that. 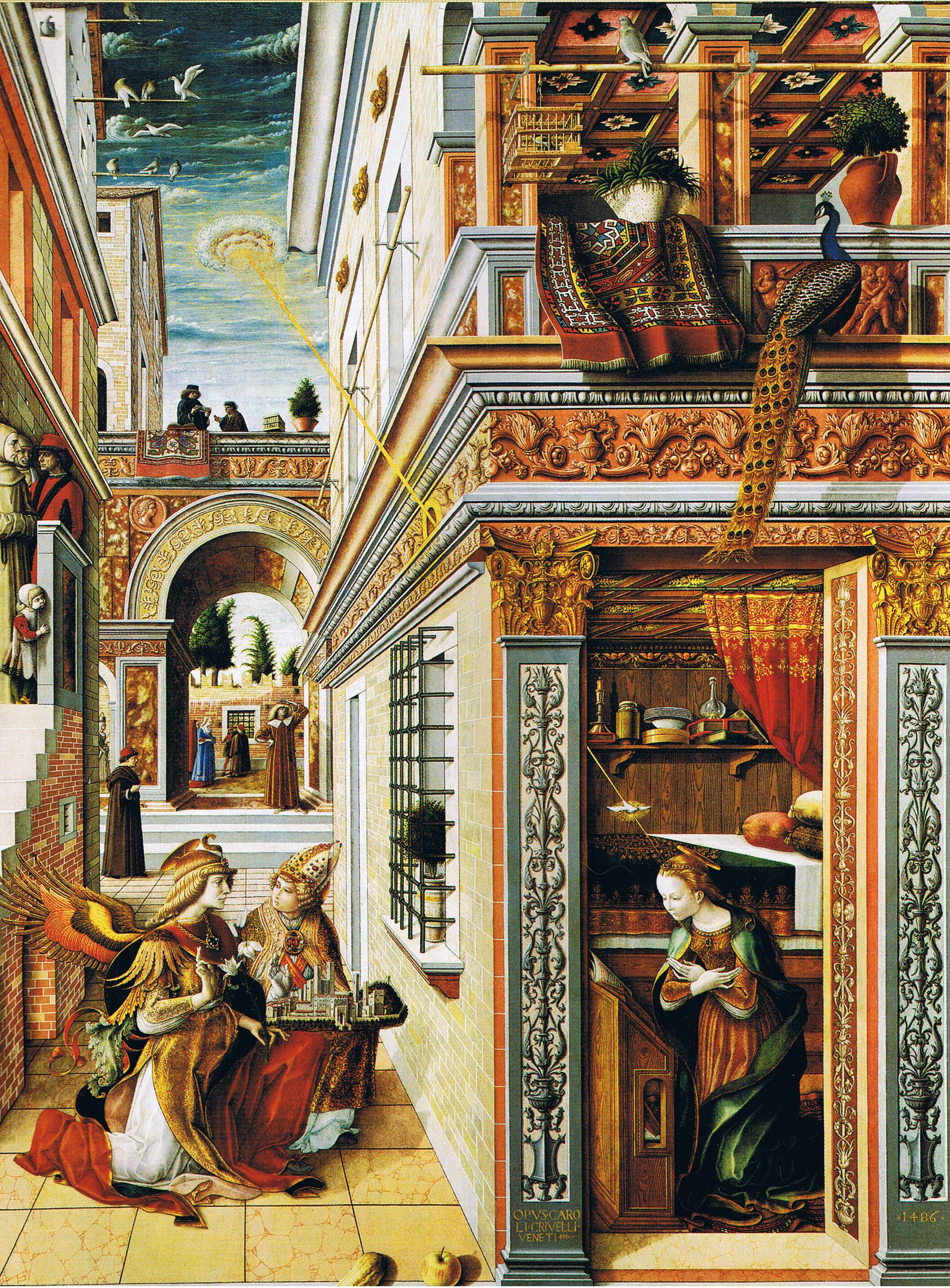 Madonna and Child with the Infant Saint John 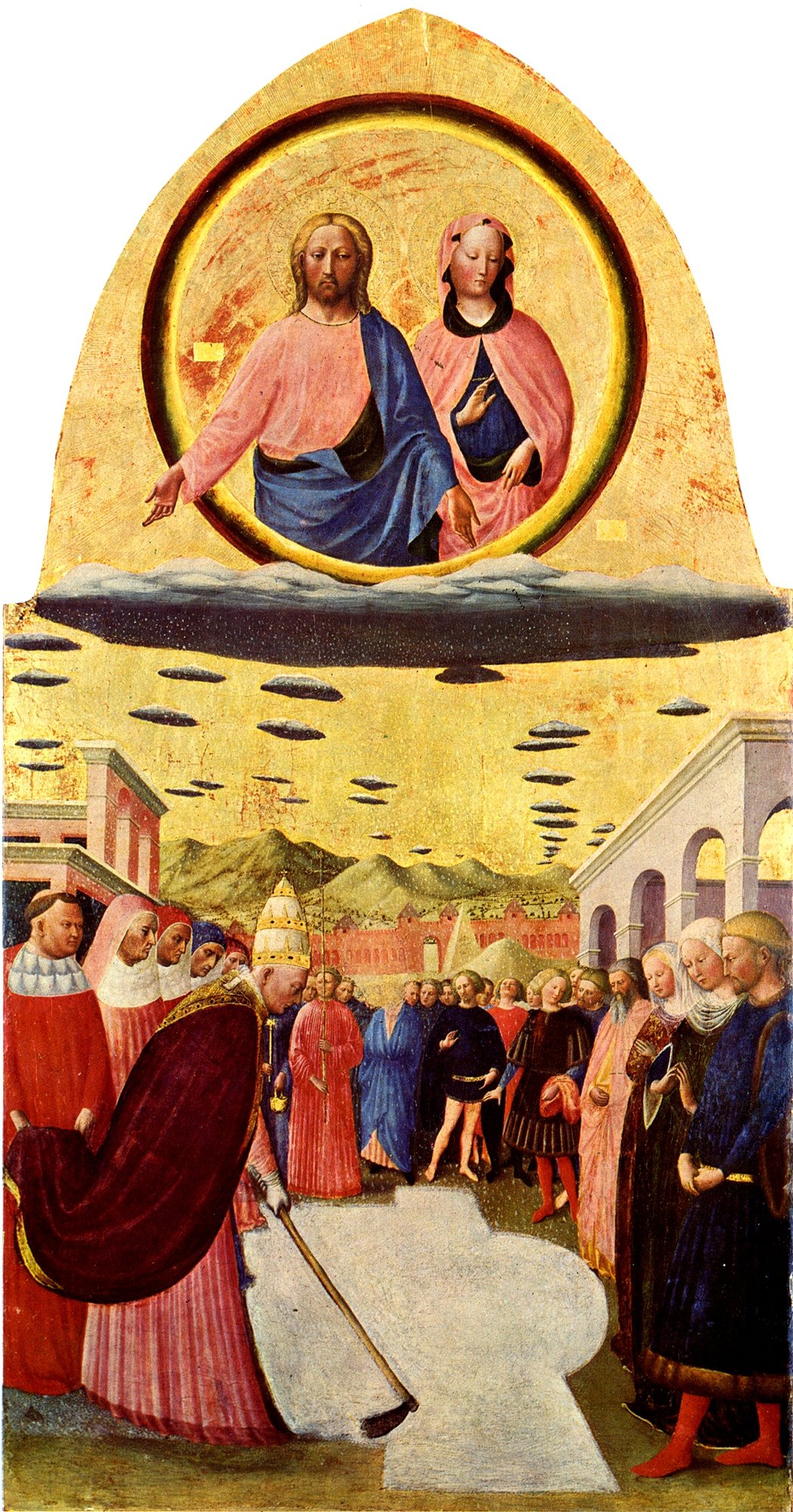 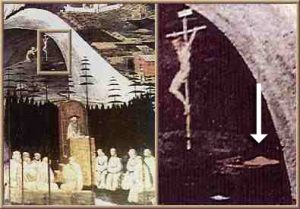 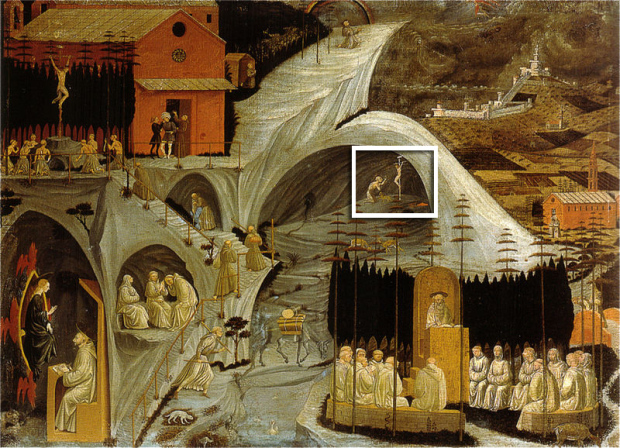 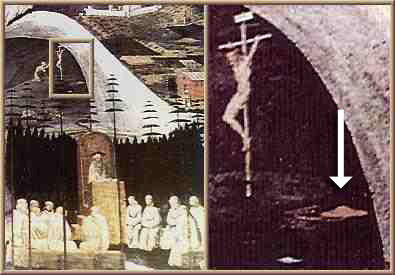 Is there any art in relatively recent history, medieval or renaissance, where symbolism, context, religious imagery or similar things cannot account for what looks to be depictions of strange activity in the sky and / or ufos? Are there any other examples of what might be considered “art” or expression of the culture at the time, or visual representation of an event, that show any kind of awareness of uunidentified flying objects or unusual activity in the sky?  There are some examples. One is a woodcut from 1566 showing activity in the sky in the early hours of August 7, 1566, Basel, Switzerland. Samuel Coccius wrote in the city’s gazette that,”at the time when the sun rose, one saw many large black balls which moved at high speed in the air towards the sun, then made half-turns, banging one against the others as if they were fighting a battle out a combat, a great number of them became red and igneous, thereafter they were consumed and died out”. 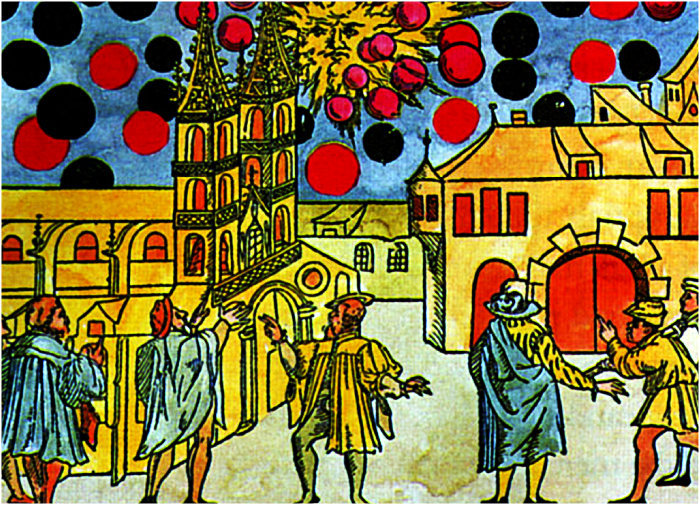 “At dawn of April 4, in the sky of Nuremberg (Germany), a lot of men and women saw a very alarming spectacle where various objects were involved, including balls “approximately 3 in the length, from time to time, four in a square, much remained insulated, and between these balls, one saw a number of crosses with the color of blood. Then one saw two large pipes, in which small and large pipes, were 3 balls, also four or more. All these elements started to fight one against the other.” (Gazette of the town of Nuremberg). 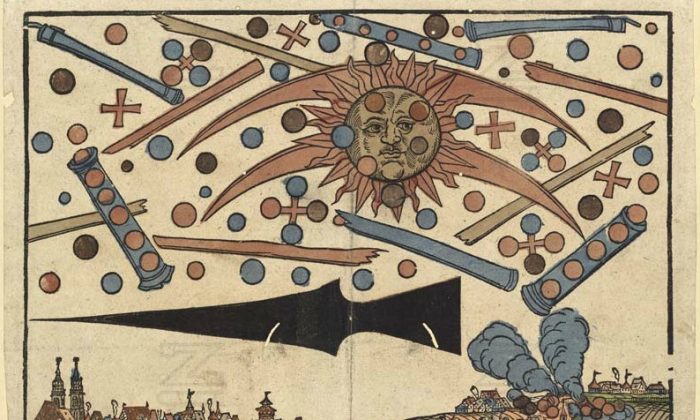 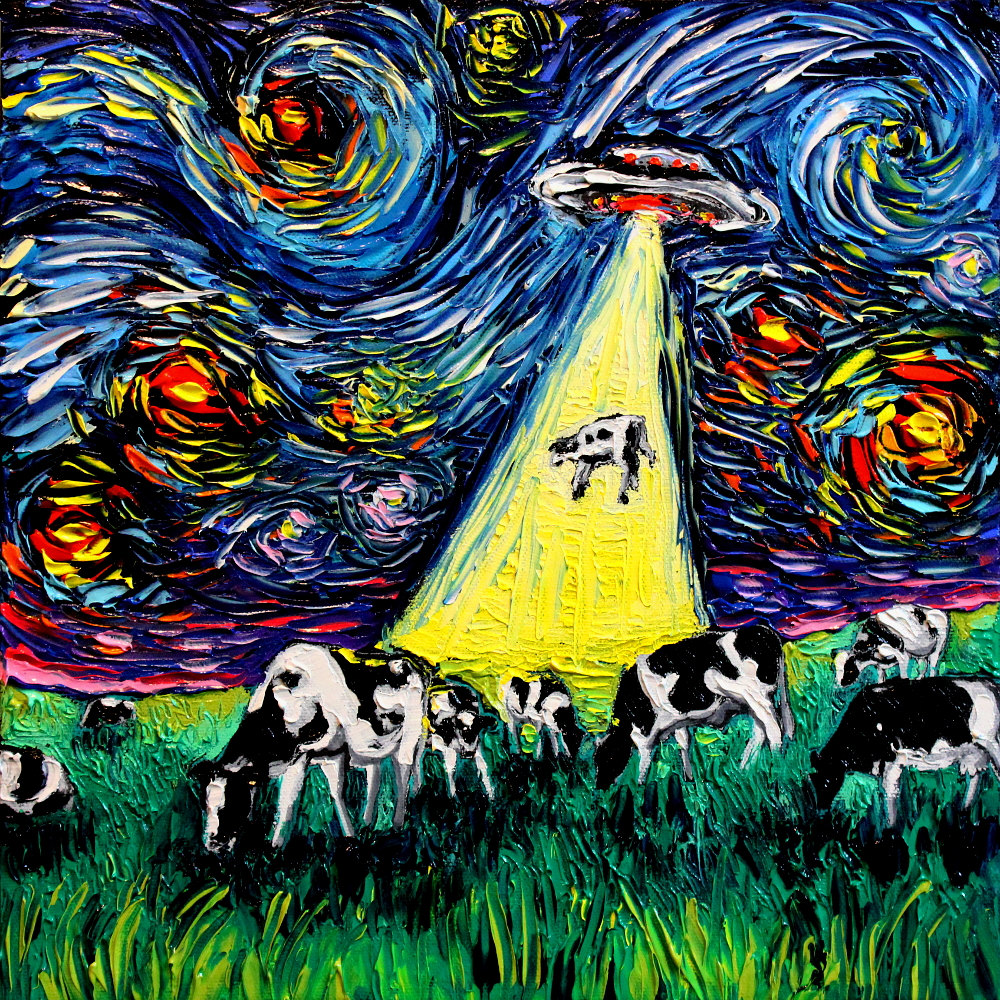